Artist, writer, and designer Anna Nielsen has enjoyed over 27 years of marking art works,
writing words and publishing her books professionally both at home and internationally.
Her unique original style combines images with words
allowing each one to tell its little story of Life
and how we all live it.

– because Life itself does not change –
Only circumstances and our individual personal perspectives, ever change. 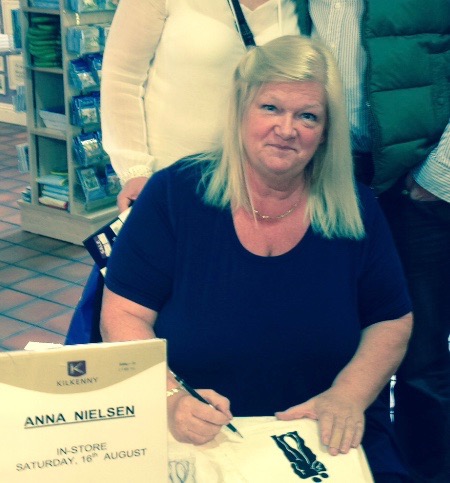 In 1965, when Anna was 11, her family moved to Ireland from Denmark.  They lived in Killybegs, Co. Donegal, Waterville, Co. Kerry and Foxrock, Co. Dublin.  She was educated by the Dominican Nuns in Dunlaoire, has a Diploma in Architectural Technology from Bolton Street, College of Technology, Dublin and worked in both private and public sectors before moving to Wicklow in 1979 and has three children and five grandchildren.

In 1980 she set up her own design and manufacturing business, mainly fashion, and worked from her home Workshop while the children were small 1980-1994.  The family moved to Ashford in 1991, where Anna has her Studio Gallery. Her first Exhibition of Original Drawings was in The Renaissance III Gallery, County Council Buildings, Wicklow, in 1993.  She has had many exhibitions since – her venues include a small gallery in Paris spring 2006 and Galleri Tavi, Skagen, Denmark 2007.

In 2008 she illustrated Filíocht Ghrá na Gaeilge – Love Poems in Irish for CoisLife which won Irish Book of the Year 2009/10. Her projects include a one-off in France, export of images to both UK and South Africa and an ongoing realtionship with manufacturing and wholesale company Rikki Tikki in Denmark – She takes lots of interesting Commissions for example for BUPA, and in 2013 she completed one for the Westbury Hotel chain and is currently completing one for Brooks Hotel Drury Street, Dublin.

She launched her first website and online shop in 2002 www.annanielsen.com

She is a member of the Crafts Council of Ireland. Along the way she designed a range of ceramic pots made by potter Rob D’Eath in 2001, two ranges of silver jewellery and ‘Serendipity’ her third book was published late 2008, it is a hardback signed limited 1/500 and also a paperback version containing: – All prints published to November 2008.  Some of her work is also available in German and Danish and a few in French.

Although Anna was born in Lima, Peru, South America returning to Denmark when she was only 18 months old and her family generations back were Danish she has lived here in Ireland for over 45 years.  She has two brothers living in Killybegs Co Donegal and a brother and sister living in København, Denmark.

“Images and Words’ are a series of drawings and words about ‘Life’ – About the events and emotions we all experience – I get inspiration from my own life, from my family and everyone around me” All the images and words are original.

It all started with a small craft company in November 1994, making a range of prints and cards from her drawings.  All the images and words are original.  Anna draws the images using pen and ink – scans them into her computer writes and adds the words and prints them in different sizes in her workshop in Ashford, Co Wicklow.  She then signs and numbers them individually in pencil – usually 1/750 – The smaller pieces are traditionally framed here in frames made by David Spollen, who frames the large pieces in Dunlaoire, Co. Dublin and then back to Wicklow where the typeset words are added to the back, along with corner titles and cellophane wrapping by hand here in the workshop which she now runs herself because of Covid

Currently she produces: – Original paintings on Canvas, Original drawings, Commissions, 4 Books, over 250 Limited and Open Edition Prints in Frames, with Mount and in Tubes, Greeting and Postcards and the recent Textile Range as well as a limited selection of Ceramics and some Silver Jewellery.

We use cookies on our website to give you the most relevant experience by remembering your preferences and repeat visits. By clicking “Accept All”, you consent to the use of ALL the cookies. However, you may visit "Cookie Settings" to provide a controlled consent.
Cookie SettingsAccept All
Manage consent